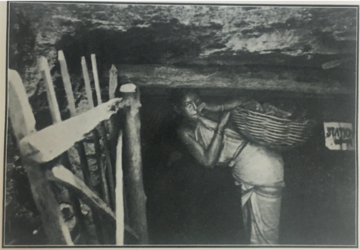 A recent paper in War & Society by Urvi Khaitan describes the politics and experiences of women in India working underground in coal mining during the Second World War. Using evidence from the National Archives of India, the India Office Records at the British Library, and contemporary newspapers, she describes how the exigencies of war pushed the colonial government to allow coal mining companies to send women workers underground, overturning a 1937 ban on underground work. Khaitan's paper is based on her master's research, which won the 2019 Charles Feinstein Prize for the best MPhil thesis in Economic and Social History.

Protective legislation—laws intended to 'shield' female and child workers from dangerous occupations—had a long history in Britain and its colonies. Khaitan recounts how the International Labour Organization (ILO) extended ideas about the vulnerability of women workers to India during the interwar period and pressured the House of Commons and the colonial government to adopt restrictions on women's work underground in coal mining. The 1937 act that prevented women from underground roles left 40,000 women unemployed and had a significant impact on their family incomes.

During the Second World War, the British Empire's demand for coal to power the war effort led the colonial government to lift the ban on underground work. This elicited protests from British and Indian women activists and the British labour and co-operative movements, who saw lifting the prohibition on women's underground work as a backward step. Khaitan highlights the contrast between colonial policy and policy at the centre of Empire, which continued to bar British women from working underground.

Khaitan also describes the meagre living standards and earnings of Indian women workers in this period. Women returned to underground work during the Bengal famine, with high food prices making it imperative for them to accept this difficult, dangerous employment. In addition, rations during the famine were contingent on work, and women and girls had to toil in the mines to receive their allocation of rice, maize, or wheat.