Workshop: The Italian Economy under Fascism 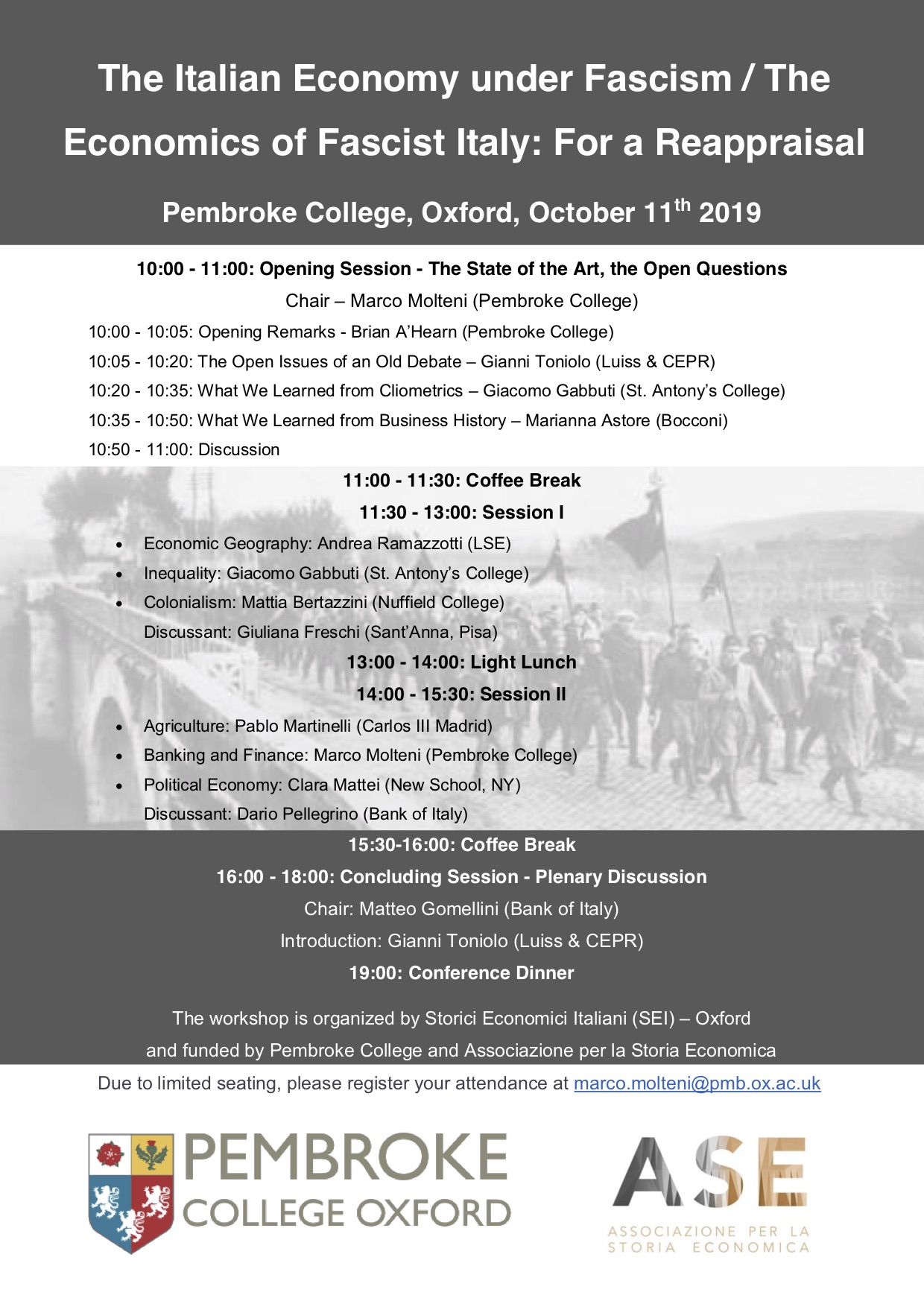 The Italian Economy Under Fascism/The Economics of Fascist Italy: for a Reappraisal (Pembroke College, 11th October 2019) represented a long overdue attempt to survey new research on the Italian economy during the Fascist ventennio. The aim of the seminar was however not only to present new and interesting findings from current research, but also to serve as a springboard for future debates, collaborations, and work on the topic – which will become all the more relevant as we near the centenary of the March on Rome.

Generously sponsored by Pembroke College and the Associazione per la Storia Economica (ASE), the workshop was organised by Storici Economici Italiani (SEI), a group of DPhil students in Italian economic history supervised by Professor Brian A’Hearn of Pembroke College, and brought together young researchers from all over the world.

Professor Gianni Toniolo, one of the most prolific researchers in the field and author of seminal work L’Economia dell’Italia Fascista (1980), delivered the opening remarks. Professor Toniolo outlined the shifting focus and consensus of the research on the ‘fascist economy’, which reached a peak in the late 1970s, and then again became of interest around the 150th anniversary of the Italian unification. While most of the research up until recently has focused on macroeconomic themes, and resulted in the collection of a wealth of data - including the creation of new series on productivity, household budgets, and wellbeing – a lot remains to be done. In particular, Professor Toniolo urged the researchers in the room to take advantage of new data to explore questions on the determinants and consequences of fascist economic policies, such as the drivers of inequality, and the impact of the infamous Quota 90 on the economy.

The first presentations following Professor Toniolo’s remarks delved further into the issue of what we have learned from past and current research, and posed questions on the direction of future work.

Giacomo Gabbuti, DPhil candidate in economic history at St. Antony’s College, pointed out that although much of the cliometric literature shies away from focusing specifically on fascism, it still helped debunk common myths about the economic and social conditions of Italy during fascism. In particular Giacomo mentioned that recent contributions on wellbeing indicators (education, nutrition, life expectancy, real wages, etc.), paint a much darker picture of household conditions than previously thought. The work by Giugliano and Giordano (2015) and Baffigi (2015) shows the lasting negative effect of the Quota 90 on GDP and productivity.

Marianna Astore, Academic Fellow at Universita’ Bocconi delivered the second presentation of the morning on the lessons learned from business history research. The picture of the Italian economy that emerges is one of a system dominated by families and the state (‘feudal capitalism’), in the context of small domestic markets and volatile international markets. One must however not forget that important productive forces set in motion between the wars helped spurring the economic miracle after World War 2. In light of these consideration, Marianna suggested that important areas of future work would include the interplay between macroeconomic phenomena and business performance.

The papers presented in the rest of the workshop did an excellent job at compensating some of the shortcoming in the research that Giacomo and Marianna highlighted.

Andrea Ramazzotti, PhD candidate in Economic History at the London School of Economics presented his work on the relevance of fascist policies on internal migratory flows and demographic patterns. The fascist regime explicitly promoted ruralism through anti-urbanisation and family-planning policies, land reclamation projects, colonial efforts, and migration policies. Andrea’s innovative empirical strategy uses population census information from 1861 to 1991 for all Italian municipalities. Addressing the existing literature, his analysis confirms that population growth was fast in large cities of the Centre and the North. However, he also shows that a secular process of population concentration – which had already been in place since 1870 – slowed down during the fascist period. The South especially enjoyed fast population growth in rural municipalities, which partly offset internal migration flows. This phenomenon should probably be attributed to international checks on external migration, rather than to fascist policies.

Tying nicely with the discussion on the drivers and effectiveness of fascist policies was Giacomo’s second presentation, which focused on inequality. The two main questions considered by scholarships concern whether wealth imbalances contributed to bringing about Mussolini’s regime, and whether certain groups benefited disproportionately from fascist policies. Giacomo presented series on labour and top income shares, as well as regional and gender data. While WW1 was a distributive shock favouring workers, income inequality increased in the 1920s – ostensibly driven by changing skill ratios among workers – and continued to grow even after the great depression. The poor quality of fiscal data does not allow for an accurate interpretation of inequality dynamics in the war years. While there seem to be a clear pro-rich bias in the effect of fascist labour and fiscal policies – especially with respect to neighbouring countries – it is uncertain whether these results were intentionally brought about by the regime. More research is also needed on the effect and determinants of rural, welfare, and trade and industrial policies.

The session was concluded by Mattia Bertazzini, postdoctoral researcher in economic history at Nuffield College, who presented the results from three of his papers on the long-term effect of Italian colonial rule in Africa – which are among the first quantitative contributions to the literature on the topic. The first paper uses an instrumental variable model applied to a spatially explicit dataset to assess the impact of Italian-built roads on long-term economic development in the Horn of Africa, and finds that areas adjacent colonial roads are more populous and wealthier – thanks to increasing returns to urbanization and coordination in post-colonial investments. The second and third paper examine respectively the long-term effects of Italian farming in Libya, and the impact of Italian farmers’ expulsion from the country. By draining resources from Libyan farmers, Italian settlement harmed Libyan development. When the Italians were expelled from the country, Libyan farmers reverted to traditional farming methods, though no loss of productivity was incurred.

Following a light lunch, the workshop resumed with a presentation by Pablo Martinelli, visiting professor at the Universidad Carlos III of Madrid, on the “spontaneous” land redistributions following a series of workers’ strikes in post-WW1 Italy. Pablo tested the theory that in non-normal circumstances (i.e. threat to property rights) the value of land falls, increasing access to land for workers. In Italy, organised workers’ action induced large landlord, for fear of communist-style land expropriation and redistribution to sell their land in smaller lots. The intensity and size of workers’ action determined the responses of landlords to threat of appropriation: wherever the strikes were large and more organised, landlords were more likely to react strongly through violence and support to authoritative measures promoted by the fascist regime, instead of selling their land.

The next presentation focused on a different phenomenon that characterized the Italian economy in the 1920s and 1930s: financial deepening, and its relation to ‘wildcat banking’. Marco Molteni, DPhil candidate in Economic History at Pembroke College, explained that the failure of universal banks in the 1920s, brought about by imprudent investment practices, led to the state owning large stakes in the financial and industrial sectors. Wildcat banking was however not a prerogative of large universal banks: while small-medium banks played an important role in the Italian economic development, many of them – especially joint-stock banks – engaged in wildcat banking. The scenario Marco presented is one of ‘financial deepening gone wrong’, and was accompanied by a wealth of newly digitalized data on the fractured Italian banking system.

Many elements linked the presentations delivered on the day, but one perhaps was all-encompassing: the connection between the political agenda of the fascist regime and the domestic and international economic forces that Italy experienced at the time. Clara Mattei, Assistant Professor of Economics at the New School for Social Research in New York explicated this connection with an analysis of ‘liberal’ fascist economic policies and of the ideology of its proponents. Most notably, the design and implementation of austerity by a group of liberal economists went hand in hand with the increasingly autocratic nature of the nascent fascist regime which enabled them.

Dario Pellegrini of the Bank of Italy moderated the Q&A on the last three presentations, after which it was time for the plenary discussion, chaired by Dr. Matteo Gomellini, Economist at the Bank of Italy. Professor Toniolo praised the excellent works presented and offered some valuable feedback to all participants, as well as ideas for future research. In particular, Toniolo urged scholars to contextualise the new insights gained on the fascist economy with comparative research including neighbouring countries. Gomellini also suggested that new avenues for research could consider trade policy, emigration policy, and the impact of fascism on domestic market structure.

A productive and stimulating day of scholarship was concluded with a lovely dinner, where researchers and attendees could further exchange ideas and discuss future research.